New major version of our flagship product Flowmon was recently released. We are tirelessly following our vision to provide customers with a complete understanding of what is happening in their networks. In order to do that, we enrich flow data (information from network and transport layer) with information from application protocols (application layer). Let’s look at the new L7 protocols we have added to Flowmon 8 and dig little bit deeper into DHCP.

Our solution has already been able to monitor and provide information from application layer for protocols such as HTTP, DNS or VoIP. Flowmon 8.0 brings the support for another two important protocols: DHCP and SMB to provide administrators with even deeper understanding of network traffic. All these L7 information significantly enrich the flow data (typically L3 and L4 information) which are exported from Flowmon Probes (or monitoring ports of virtual Flowmon Collector). Today we will take a closer look at the DHCP protocol.

Firstly, a little bit of theory. Dynamic Host Configuration Protocol (DHCP) is application layer protocol for dynamically distributing network configuration parameters, such as IP addresses for network interfaces, gateway IP address or other network parameters. DHCP protocol operates based on the client-server model and uses ports 67 for server (bootps) and 68 for client (bootpc). The principle is depicted on the following picture. 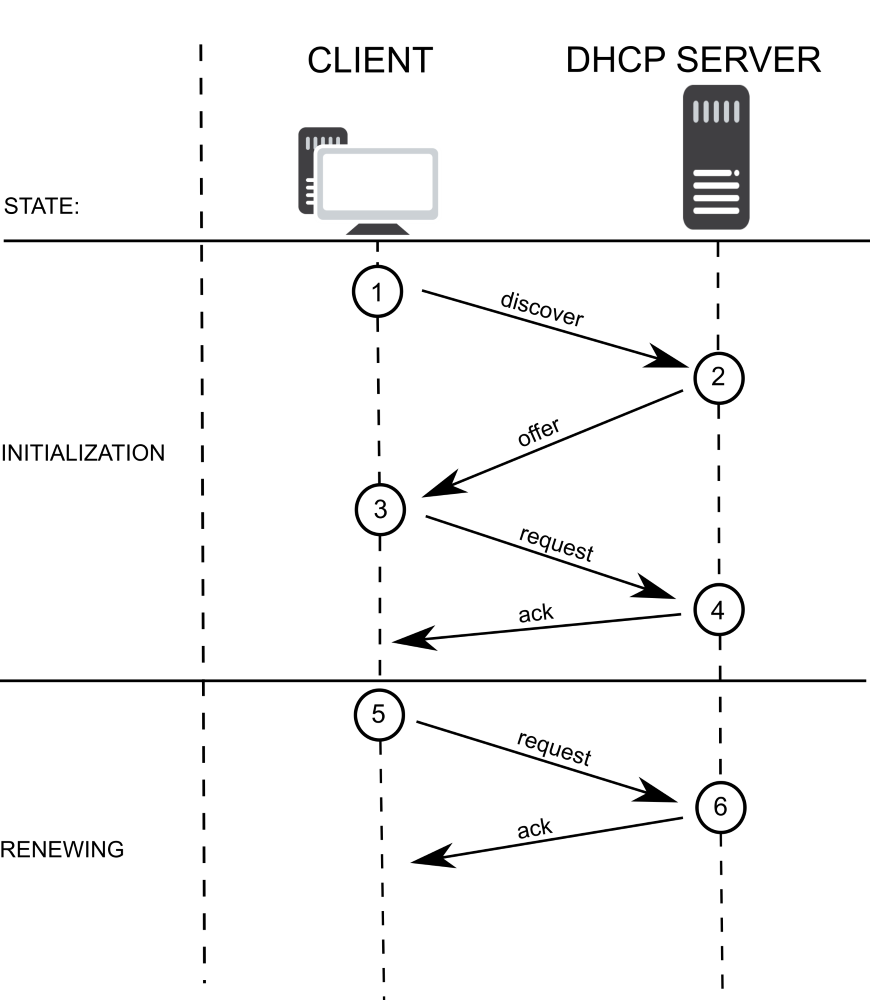 Enough of theory although there is more to know about DHCP protocol. Let’s have a look at what you can see in Flowmon.

Figure 1 captures DHCP communication between host (client) and DHCP server. On the following picture, we can see the corresponding communication in Flowmon. Every part of communication on figure 1 (DHCP messages 1 through 6) corresponds with one row of the list records in Figure 2. Host Employee has connected to the network around 10:15 am. Host was in initialization state. Communication went correctly according to DCHP behavior described in paragraph above. Around 13:23 host renewed lease of IP address.

Note the difference between what you can get from the L3/L4 and what additional information and deep insight is brought by Flowmon. In the following picture, you can see what parameters you are able to monitor. 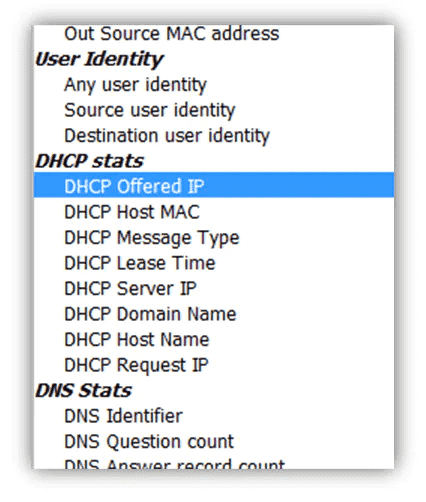 It goes without saying that you can filter the network traffic using all DHCP parameters above. Filtering flows helps with network troubleshooting and allows Flowmon users to create profiles, reports and alerts (examples below).

Figure 4: All DHCP parameters can be used for filtering flow records.

Monitoring and visibility into DHCP protocol simplifies network management to administrators and provides them with various benefits – from basic DHCP operating logging and host identification to solving and troubleshooting various use-cases.

Host Employee is reporting issues with connection to the network. To find out, whether the problem is in DHCP, we can use several parameters to filter flow corresponding to particular host. We can use his MAC address and use filter “dhcp-hostmac host_mac” or even use his host name and use filter “dhcp-hostname host_name” . As a result, we will see whether the problem is in DHCP. We might see similar result to this one:

Thanks to the visibility into DCHP protocol, we are able to see individual communications between clients and DHCP Server which are going through the DHCP Relay Agent. This is achieved by adding DHCP Host MAC as a key field (attribute) for aggregation of flow records.

Not every DHCP use case needs L7 visibility. For example detection of DHCP rogue server . DHCP rogue server is unauthorized server that also offers client’s IP addresses and other network parameters like default gateway and DNS server IP addresses. Such server represents not only operational but also security risks. From operational point of view, clients may experience problems with network access or communicating with other hosts due to incorrect IP or gateway. From security point of view, DHCP rogue server can be used by attackers for various network attacks (man-in-the-middle, sniffing and reconnaissance attacks).

To detect DHCP rogue servers in Flowmon Monitoring Center, we can set up alert. Alert can be configured using filter src port 67 and not ip dhcp_server_ip and setting condition for number of packets exceeding 0. Now we will be alerted, when other host then DHCP server starts to send DHCP messages of DHCP server.

Let’s now create profile for DHCP traffic. I’m showing simple example of profile where I use filter “dhcp‑type “NAK””. I will be able to see how many “NAKs” are in my network. Using filters src port 67 and src port 68 I am able to create two separated channels for DCHP traffic from server and client. 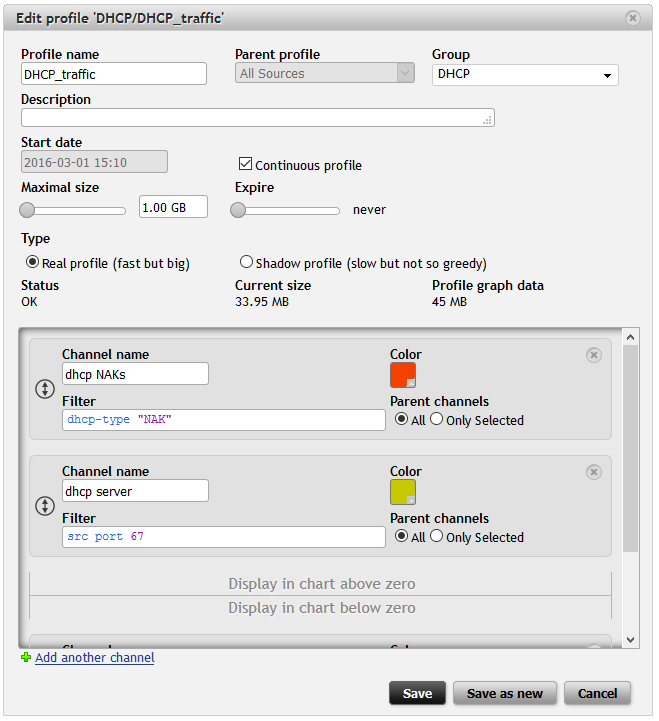 Everything is ready after hitting “Save” button. The results are on the following picture. Green is for server , blue is for client . Seeing big asymmetry in the traffic could represent some problems with DHCP. Red parts are DHCP NAK messages. So having a glance at this chart I can say that there is no problem with DHCP on my network. 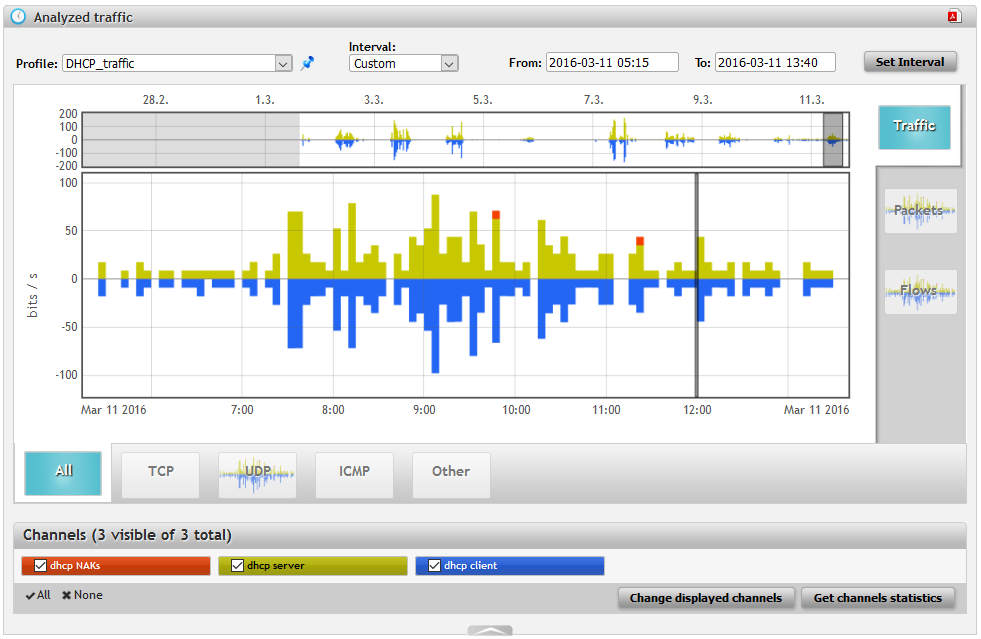 As a next step I have created report to be automatically reported about DHCP traffic. First I have created chapter with DHCP traffic using DHCP_traffic profile created in the previous step. Next step was to create report using the chapter and schedule time of sending. 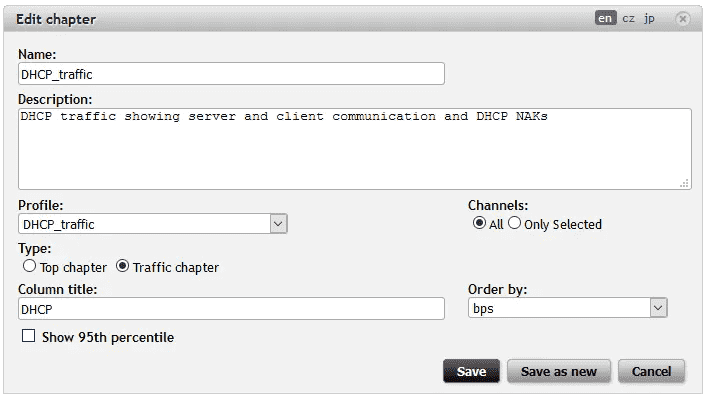 I also wanted to immediately know, if there is too much NAKs. So I have created alert which will alert me in case something goes wrong. I have configured condition for sending alert as number of NAK packets above absolute value and 30 min average value. Now if something goes wrong and hosts get their request for IP address allocation declined, I will know immediately. 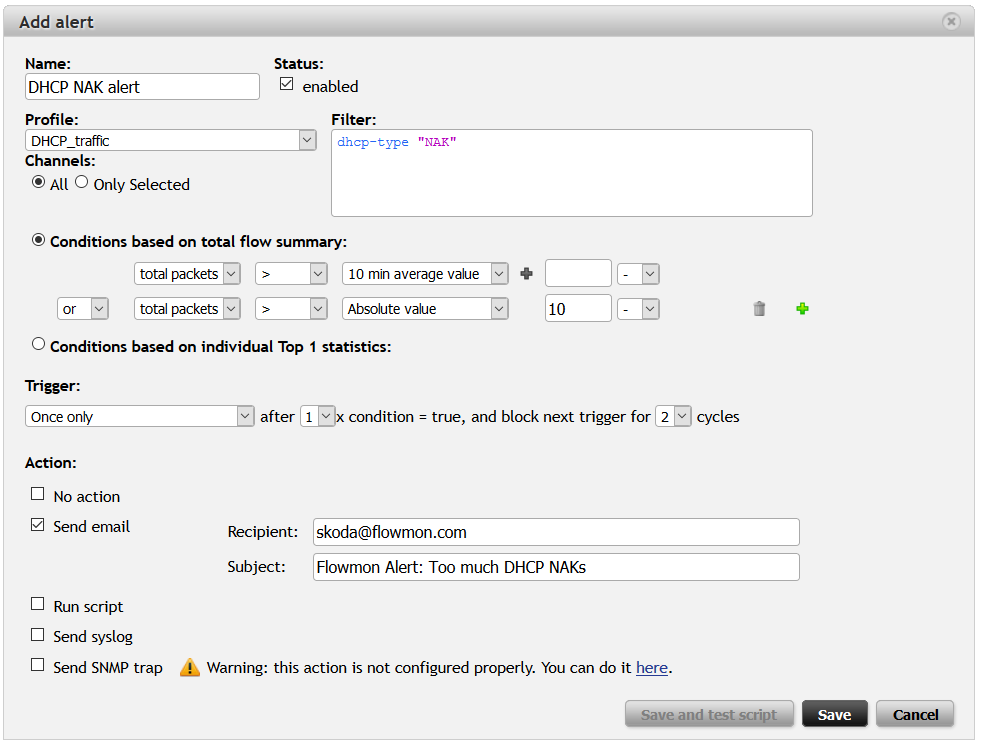 How to try it?

Are you interested in getting visibility into application layer? Download our free trial – virtual Flowmon Collector equipped with 2 monitoring ports (Flowmon Probe functionality). Follow the quick start guide attached to the zip file to quickly deploy the trial version. After deploying virtual collector into your VMware or Hyper-V environment, go to the Configuration Center – Exporters. Set IPFIX export protocol, go to Advanced options and check DHCP, Samba or any other L7 protocol and click on Save.

Now the monitoring ports of virtual Flowmon Collector are exporting information from L7. Next step is on collector side to show this information. Go to the Configuration Center – FMC Config and click on Configure Flow Database Fields . Here check the protocols and data you have selected in previous step and click Ok . And that’s it. Now you are monitoring L7 protocols and enjoy the benefits of deeper L7 visibility. 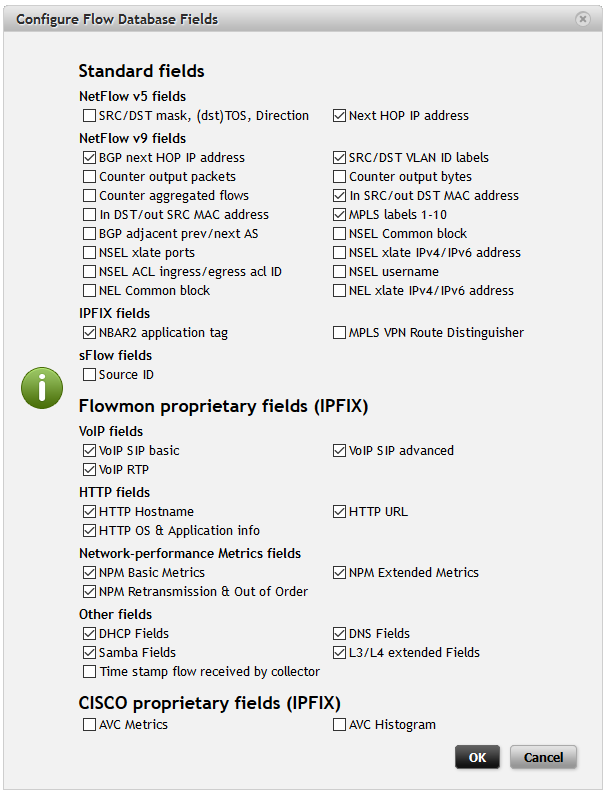 Learn more from our latest webinar about news in Flowmon 8 and Flowmon ADS version 8 at the Flowmon YouTube channel. Stay tuned for more blog posts and news from Flowmon 8. We will be talking about Samba protocol monitoring next time.

Get the insight with Flowmon. Try out the Flowmon Live Demo or free TRIAL and stay in touch for further information on our products!