5 predictions for cyber security in 2019

Last year completely refuted doubts about the increasing cyber security risks. Hackers, obtained sensitive data on hundreds of German politicians, including Chancellor Merkel and accessed data relating to tens of millions of Facebook accounts. The year also confirmed that hacking has become a means for political activists and an effective tool for professional criminals who have discovered a lucrative opportunity on the internet. What conclusions can we draw from these events for 2019?

1. ATTACK ON THE INTERNET OF THINGS

For some time now there has been an opportunity to exploit devices and various sensors connected to the internet. However, with their greater use in industry, the energy sector and in building management, the risk has increased significantly. The Internet of Things (IoT) devices are usually not designed with security in mind. Hackers can easily take complete control and deploy botnets targeting IoT devices. By amassing a botnet army, it is possible to attack selected web services or the infrastructure of an internet service provider. An artillery barrage is still awaiting. Running under IoT even more powerful devices have grown, with greater computing power and relatively high demands on the capacity of communication links. Hand in hand with this grows the consequences of their misuse.

2. MORE ATTACKS ON THE PUBLIC SECTOR

Even though we cannot tell in advance whether we will soon have extensive attacks on the infrastructure of a country, we can be sure that all kinds of attacks last year happened against many public organisations and cities. Two examples are the following incidents that took place in the USA. At the end of last year, the US Department of Justice secured an indictment against two hackers. The hackers had used ransomware to encrypt the data of several cities, hospitals and other public institutions, and by demanding a ransom they received over 6 million USD. A somewhat bigger incident involved a long-term attack by Iranian hackers on roughly two hundred American cities, ports, universities and hospitals. These incidents only confirm a greater focus by attackers on the public sector.

3. ARTIFICIAL INTELLIGENCE AT YOUR SERVICE

One of the most powerful technologies in the service of cyber security is machine learning and artificial intelligence. Today, we can make security devices act autonomously. So, we can hunt for sophisticated threats based on behavioural analysis of networks, and when positively detecting a threat, the device can automatically take the necessary preventative measures. Unfortunately, the new technology can be also be used in reverse in preparing sophisticated attacks. So, this year we can expect new intelligent security technologies, but also a more intensive use of artificial intelligence by hackers. Take the DeepLocker malware, which uses machine learning techniques to hide from security tools to attack as many devices as possible.  While sophisticated tools had once only been available to security services in some countries, now they can be used by any reasonably good hacker.

The lack of cyber security specialists is one of the main reasons for the vulnerability of most public and private sector institutions. Research carried out by EY’s Attractiveness Survey: Building a Better Working Europe pointed out that almost half of firms (48%) lack experts in information security. Worldwide there is almost a 3 million shortfall of cyber security specialists (according to ISC Cybersecurity Workforce). The demand will continue to grow because of legislative changes.

Lack of experts in 2018 IT security according to regions; source: (ISC)'s Cybersecurity Workforce Study 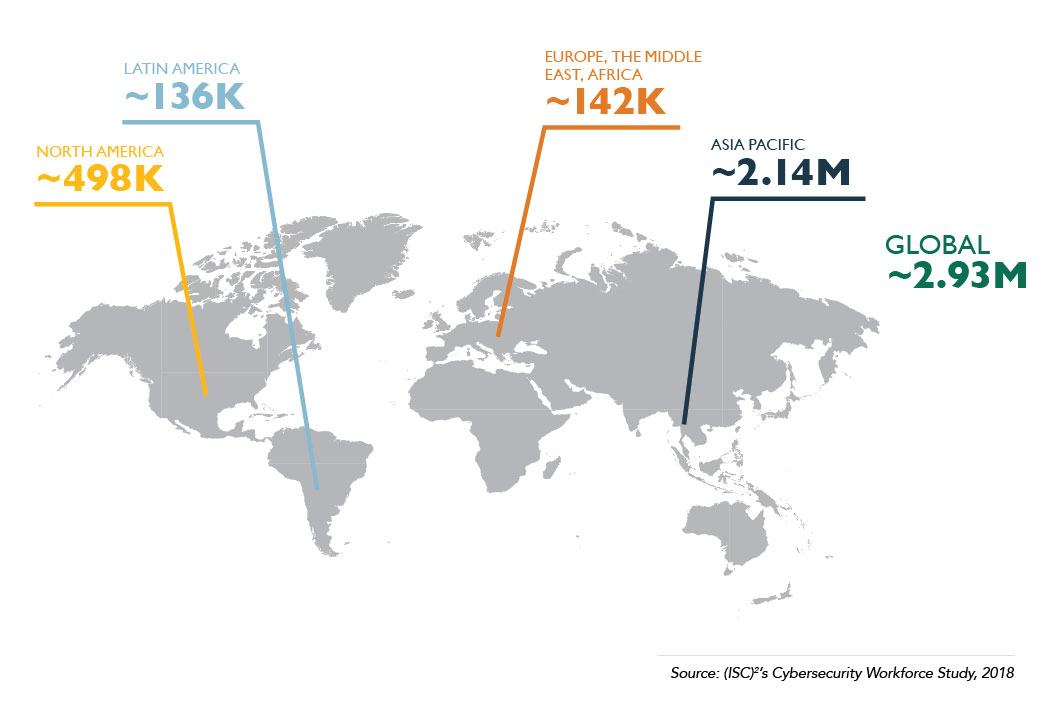 It may have seemed that 2019 began in encouraging way that cyber crime is not worth the risk and would serve as a deterrent to would-be cyber criminals. Widely reported in the media two cases ended up in the conviction of the hackers. The first of them was sentenced to 10 years for an attack on medical devices (including a children's hospital). The second case took place in the UK, where in autumn 2016 Daniel Kaye with the help of a botnet took down the whole of the internet in Liberia. Rival local internet providers were involved. One of them used the services of Kaye to knock out the other. But the attack was so huge it shut down connectivity across the country. The damage ran into tens of millions of US dollars. With such cases as these from the media, we can draw a similarity with airline accidents. Each incident makes the impression that computer-related crime is an extremely risky business. In reality, hackers feel almost untouchable and know they can get away with it. Computer crime, as a result, remains the fastest growing type of crime, as is currently happening in Great Britain.